We wanted to teach the students about different types and reasons for writing, so as their writing during the farm unit they will be writing in a book titled, “My Farm Book”, which is essentially a writing journal for each student. The first entry in their journal was labeled “Cracked Egg Observation”. The student’s observed/touched a cracked egg so they could see what the embryo ate to keep growing while in the egg. I explained that once the egg yolk was gone, the baby chicks would be ready to hatch! I was really impressed by their observations! Below are some student examples. 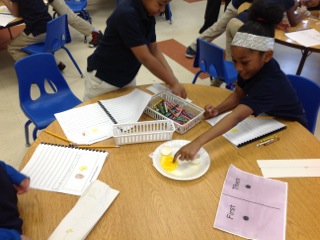 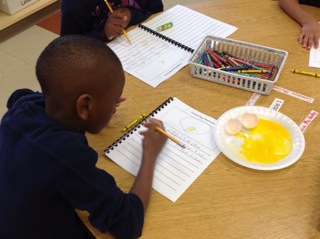 So yesterday, (previous blog), we completed an open sort or classification of different pictures that could be found in the city and/or country. The students really gave great rationale for why certain pictures went with each other. They came up with 5-6 different ways to sort this.

I am blogging about this activity today, even though it does not use the ipad and technology, because the discussion with kindergartners was so rich and deep. It really allowed the students 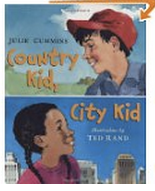 Chart-Similarities between city and country
Writing integration-Where would you rather live, city or country? Justify your answer with supporting sentences.

Day 2-Chick egg introduction (I would not always do this activity on the second day of this unit, but the live chick eggs arrived today and so it is important to introduce them, explain and show the incubator that will be in the classroom for the next 21 days.)

In our morning meeting and letter to the students, I wrote the sentences "How does the hen nurture the growth of the chick? How can we nurture the growth of the chick?" These questions were the guiding questions for the students as I read the story. I read a book about chicks. (I have about 15 different ones and most tell the life cycle so all can work). 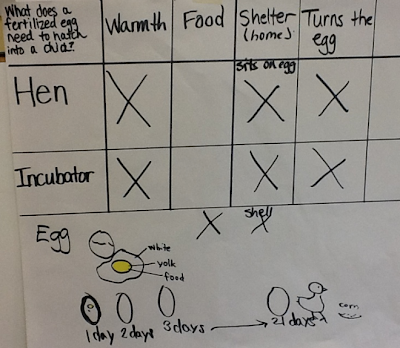 I had prewritten the focus question "What does a fertilized egg need to hatch into a chick?", the left column (hen and incubator), and the lines for the chart. During the reading, the students had opportunities to discuss the chicks and how they growth. We then completed the chart. They came up with the features on the top of the chart.

I had a couple of students that did not do well on the word study assignment given to them. It can be hard to spend the five minutes (or less) needed to fix misunderstandings and check comprehension of the task with 25 other children in the room.

So I made an Educreations lesson designed just for them. They watched this video lesson prior to the word study activity. My intest of the lesson was to give them additional strategies (in this case, arm blending) when they sound out each word. I believe they were sounding out each word but with arm blending they can better isolate the sound they need to focus on. I went over each picture or word with them and practiced the strategy with them. I then took a picture of their word study activity from the day before and I went over their work with them, focusing on the errors they had made. Then I took their iPad and created the educrations video on their ipad. I gave them a picture of the educrations app so they knew they have a video to watch. 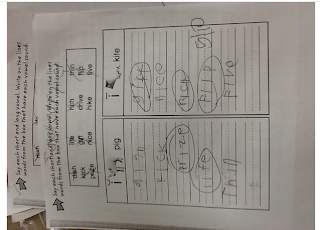 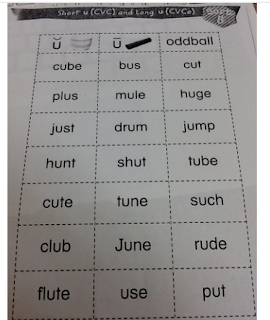 These 2 minutes that I used to prep was so valuable because the students got their individual help and my word study lessons could continue. I did this for 4 students on this day (total of 10 minutes of prep time). The students next activity or repeated activity (depending on the child) was successful.
Posted by Carrie at 7:12 PM No comments:

Our staff has been participating in critical thinking continuum PD for the last quarter. One of the sessions focused on open sort classification. So, we are beginning a farm unit. Initially, my teaching partner and I were planning on having the students do a open sort on the ipad individually. They would download the pictures from Dropbox on the Educreations app. The students would sort the pictures and record their reasoning/rationale of their sort. At the last minute, we changed our mind and decided to do the open sort/classification activity as our Do Now. Well, my Do Now took 20 minutes and the students were completely engaged. They came up with multiple ways to sort these objects. It was amazing.

Attached is the educreations activity we did together. I projected the pictures on the screen. I moved the pictures and wrote the words. I also repeated what the students said so all could hear and any audience listening/watching would be able to hear as well. 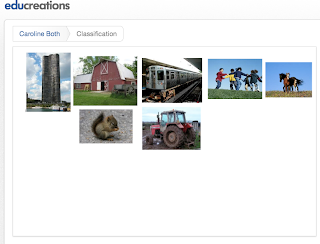 Upon reflection, the value of doing this activity as a whole class is amazing. I don't think I would get these kind of answers if the students did the activity by themselves (actually I know I wouldn't). I would get the one way they sorted it. I think possibly by having some groups, there would be more of a chance to get this same kind of discussion and critical thinking by the students. I am glad that this was a whole activity. I am excited to do the next one.

The key to the open sort is that there are multiple ways to sort. The squirrel and then I added the children quickly at the last moment (instinctually) technically fit in both farm and city sorts but made the students really defend their answers and explain their rationale for where they put each object.
Posted by Carrie at 7:05 PM No comments: