Cloning the teacher--Being in 25 places at once

So, today I took one huge step on flipping my classroom (not just baby steps). The students have about 10-15 minutes of iPad time right after lunch during bathroom break to work on their iPad. They usually work on a math app. NOW, I have created small videos personalized to the students that address each individual student's needs.

Another example, is a short mini lesson about counting on when adding 2 numbers with a sum larger than 10. We had already differentiated the addition exit slip for the different groups in the class. Some of the students who had the most difficult addition sheet had some difficulty with adding 9 + 4 or 8 + 3, etc and so I made a quick mini lesson video to directly address counting on from the bigger number. This video will be upload directly tot he students' iPad. They will watch this video the next day prior to the math lesson.

Each little mini lesson video is saved and goes into my library of videos. Initially, there might be some time spent on creating the videos but in the long run, they can be used over and over.

So here is how I did it. Each example was done a different way and both are super easy! Here are the two ways.

1. I used the Doceri app. It is similar to the Educreations app (that I have used and talked about in previous posts). Doceri is better for recording and making these mini lessons. It has the capability to change backgrounds including lined paper, insert pictures, and edit your video without starting all over if you make a mistake. Then save the movie. Drag it to your camera roll on the ipad. Import the video to your iPhotos. Drag to the iTunes library. Then upload the video to each student's iPad.

2.  I used the ipevo video camera (about $50 on Amazon) and Quick Time. I plug in the mini video camera (it has a stand so you don't have to hold anything and have both hands to write or show pictures, etc). Then I turn on Quick Time and begin a screen casting recording. When I am done, I save the video to my desktop and then drag to the iTues library. Then I upload the video to each student's iPad.

Okay, you may say that uploading individual video to each iPad may take forever, but it goes fast. You can upload multiple videos as well. The only reason I don't is that I find kindergartners aren't best at reading my titles (which are designed for me to know what is on them). To actually upload the video takes less than 1 minute per iPad. I am not doing literacy centers and other more time consuming prep work because I have iPads so it sorta is the same amount of prep time.

Here are some tips:
--Make the videos short little clips (about 5 minutes are less) as we don't want to be lecturing for long periods of time
--If you are giving the students an exit slip or paper worksheet to complete, you may want to tell the students to circle their name or mark the paper in some way to know if they actually listened to the video or just completed the work.


I am a novice when it comes to this but it was really quite easy. Practice speeds up the process. I have already made 6 videos in the last two days because they kids are excited to get a video to watch AND the students' work is benefiting from me being in 25 different places at once (via the video).

This practice started with having the students telling me what they know about a graph they created. Each student was given a blank Thanksgiving graph and had to glue the different foods on the graph. Each student had a different number of the different food items so students had to complete on their own. Then they had to open up Educreations app and press record. The students were then instructed to tell the ipad (or me) what they knew about the graph. We talked about using math words like most, least, more than and less than. They were then reminded how to save their work.

Considering this was the first time, most of the students were able to complete this task. About four  students had one or two seconds recorded. I am not sure what happened there but these students will be a focus next time we do this to ensure they understand this process/task.

In the future, I would like to work on decreasing the background noise of each other. I think some of this will decrease as the students get better at doing this and understand the routine better and don't need assistance on the procedure to record. I also think I would give them cue cards on words or pictures of the different math terms we use to make sure they are incorporating them into their descriptions.

Here are two examples of the student's work and their description of the graph using the Educreations app: 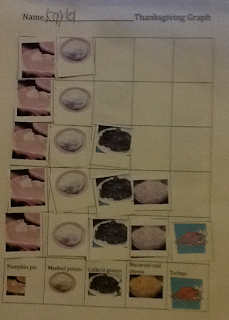 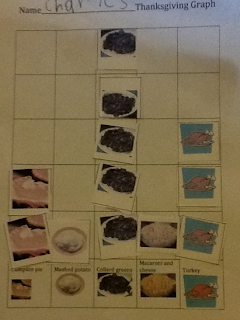 I can't wait to see what they can do the next time.

Posted by Carrie at 7:11 PM No comments:

I have blogged about this app previously. It is a free app (yeah!). My students really love this app. One enticing feature is that the students can compete against their classmates. Each student has picked their own character. They play against others--the app picks their competitors. The students get so excited when they see their classmates. It really increases their motivation to do well.

I have a student that is very low academically and has a very limited attention span and this game keeps him "glued" to the iPad the whole time. He likes the competition and the activities. I also find that even though he is still working on the very basics, the questions are presented in a variety of ways.

I also like the data shown on this app. Here is a snap shot of the information. It shows the students names, how many questions they have completed, the time they have spend on the app and the last time they played. 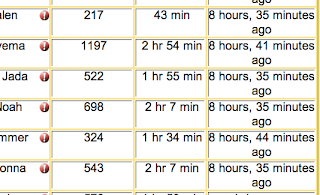 Then, you can get further information by looking at each student's data.

You can get more detailed information about the different questions and concepts. 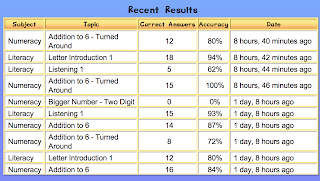 It has taken a couple of days for the loud cheering to become quiet excitement when they work on the app. I think all that is a good thing though.

Posted by Carrie at 7:54 PM No comments:

I am beginning the process of having students record their thinking and explaining the process to get their answer. I say beginning because last Friday's lesson where I introduced this process felt like a stumbling block. The students had used educreations before where they drew the pictures about each story problem. We shared our ipad drawings using apple tv (this they really loved). It allowed any of the students to project their ipad on the screen.

I modeled how I drew my picture, shared my thinking aloud, and "recorded" how I got my answer. We did this multiple times. Then, we had a few students (who I felt confident could demonstrate this) actually draw the pictures and do the story problem. However, they were so engrossed in the drawing they did not speaking. I was so disappointed.

I think more work is needed and more practice. I also think that at this developmental level that they are so focused on the picture that talking about it and drawing it, they are just not ready to do.

More work is needed. More modeling. More practice. We will get it.
Posted by Carrie at 7:36 PM No comments: